The Grande Age of Hyboria

Black powder wargames between imaginary nations (or imagi-nations as they are often called) have been a wargame staple for decades, popularised by the likes of C.S.Grant in Charge! Taken with the idea and the availability of cheap 28mm scale Napoleonic plastics I have decided to have a go at my own imagi-nation games, but rather than devise my own pseudo-Europe I have taken Hyboria, the wonderful creation of Robert E. Howard, as a template for my games. Conan may now be long dead and his exploits just the stuff of legend, but the land he knew is still gripped by war...

Having settled on a uniform for the Aquilonian infantry I decided to have a crack at the Argosseans. As previously stated they would be my "British" parable in the Grande Age of Hyboria, but I didn't want them to look British. Consequently I am using HaT's lovely Bavarians. 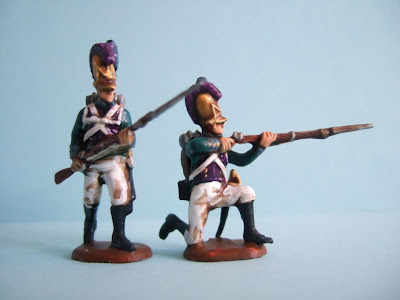 Doing some research on Hyborian flags, Argos apparently has a purple flag with three yellow/gold balls. This led me to consider purple as a colour for the Argossean infantry tunics but in the end I went with purple for the tunic facings and plumes and green for the tunics themselves. Initially I also painted the breeches green but this made the figures far too dark so I switched to white. For the Raupenhelm I decided to go with gold, rather than the Bavarian black, which has been toned down by the dip. Overall I think the scheme works nicely, now I just need to get some complete units painted up!
Posted by Steve at 13:55 12 comments:

Email ThisBlogThis!Share to TwitterShare to FacebookShare to Pinterest
Labels: Argos

When painting your own uniform design it's always worth testing it on a couple of test pieces before subjecting an entire regiment to something that looks good in your head but might not work in real life (!). To this end I painted up a couple of spare HaT Voltigeurs in my proposed Aquilonian Line Infantry uniform. 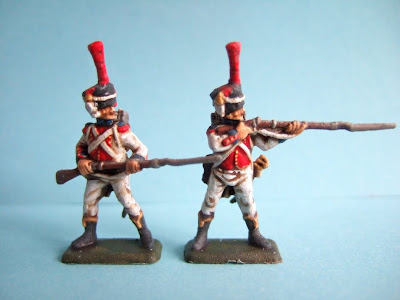 Overall I am pleased with the look, my only concern is whether the dip I have used is too strong and whether I should use a lighter one. It certainly provides a nice degree of depth and a slight "on campaign" feel but I'm not sure. As I need to get a new can of white undercoat before tackling the first unit I have a day or two to ponder.
Finally, the Bavarians have arrived. Lovely models but moulded in a shocking bright mid-blue!
Posted by Steve at 09:29 5 comments:

Email ThisBlogThis!Share to TwitterShare to FacebookShare to Pinterest
Labels: Aquilonia

I've been working out a rough plan for the composition of the Aquilonian army using the Black Powder rules system. I like the Black Powder mechanics, being familiar with them through Warmaster and whilst they might be for "big" games, there is nothing wrong with being ambitious, especially in plastic... 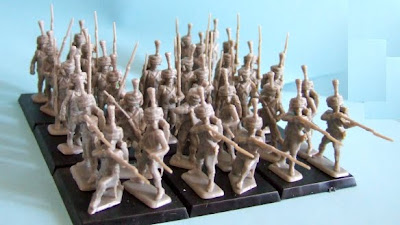 Consequently I'm working on the idea of a three brigade army, each with three infantry regiments, one cavalry and one artillery battery. This will probably change as time goes on (possibly grouping the cavalry into one brigade), but the thing about Black Powder is it flexibility in this area (I may also use Barry Edward's Playable Napoleonic Wargames for some smaller Brigade level games if I can dig out my old copy). 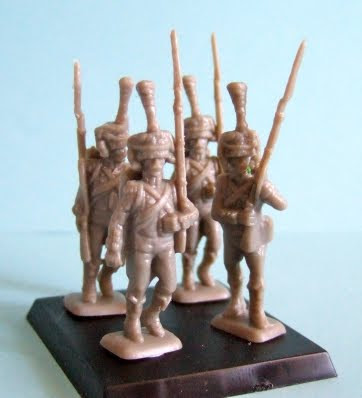 Armed with a plan I then had to decide on unit sizes etc and I have (for the time being) decided to go with 36 figure regiments for the Aquilonians. My initial idea was to have six figures on a 40mm square base but even the slender HaT figures are too big for this so I've had to switch to four a base. I've got 8 bases now ready for undercoating, the (ninth) command base will have to wait until HaT release their (28017) French Chasseur Command as the Voltigeurs only have one officer figure and no musician of standard bearer. I may end up converting some figures for command bases with future regiments but have enough figures now to paint with this regiment and the Carabiniers who will probably form a Poitainian Guard regiment (current plan is each regiment will come from a different Aquilonian province). 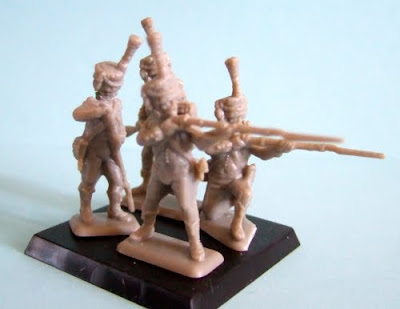 Luckily this issue with command looks like it will only affect these early boxes as all subsequent releases seem to be in three box sets, marching, action poses and command. That said, converting the HaT plastics is very easy, especially head swaps and I took the opportunity to decapitate and switch a number of heads between the Voltigeur and Carabinier sets, as the uniforms are identical with only the headgear differing.
Posted by Steve at 15:30 3 comments:

Email ThisBlogThis!Share to TwitterShare to FacebookShare to Pinterest
Labels: Aquilonia

Whilst Argos, as the premier Hyborian maritime power, will be largely influenced by C18/19th Britain, I wanted to avoid having the army look like Wellington's "scum of the earth". Looking at what HaT has in production (and what is planned) I have opted to use their Bavarians for the bulk of the Argossean infantry and have ordered a box each of (28010) Bavarian Infantry Marching, (28011) Bavarian Infantry Action Poses and (28012) Bavarian Infantry Command.

I really like the unique look of the Raupenhelm, which has a vague feel of the Tarleton, and looks great on infantry. With HaT not doing cavalry at present I will probably look to the Perry Miniatures and their (FN120) French Heavy Cavalry includes the option to make the figures up as Carabiniers who sport a similar looking helmet so will help the overall theme. 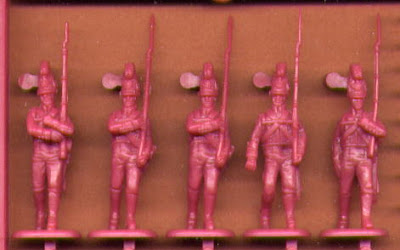 Looking at the map of Hyboria, Argos is an ideal enemy for Aquilonia, the country occupying the easiest route to the sea and thus thwarting the imperialist ambitions of the mighty Aquilonia.
Posted by Steve at 11:53 No comments:

Email ThisBlogThis!Share to TwitterShare to FacebookShare to Pinterest
Labels: Argos

The Grande Age of Hyboria

Using Hyboria for an imagi-nation campaign world is not new. For many years Tony Bath's ancients campaign ran in Battle for Wargamers and subsequently Military Modelling and I do recall seeing someone using the idea for SF armies as well. Having always loved Howard's Conan books, it seemed a good idea to take his human fantasy world and use it as the basis of an imaginary black powder world. 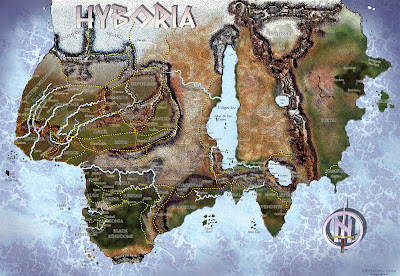 (map of Hyboria copyright Chrysagon)
I will adopt a few ground rules. First off no magic. Whilst Howard includes it in his stories, I'm taking the line that like many of our legends it is just mythical or an illusion now explained away by science. Secondly I want to try and use the Conan stories background to help flesh out the black powder troops, especially when it comes to creating the feel of the armies. Finally the project has to be cheap! I'm intending to use HaT's new 28mm plastics with maybe some Perry and Victrix if needed. Metal figures will be for luxury items unobtainable or unconvertable in plastic. I am hoping to avoid the (realistic) greatcoated campaign look for a more parade ground uniform and HaT seem to fit the bill here.
To start with I've purchased a set of HaT's (28003) French Light Infantry Voltiguers and a set of (28009) French Light Infantry Carabiniers and these will form the beginnings of the new Aquilonian army.
Howard's Aquilonia had a heavy medieval French influence and I will use this as the basis of the army both from a miniatures point of view (albeit with an emphasis on busbies and bearskins - no shakoes if possible) and rules stats. I hope to paint up an Aquilonian test piece over the weekend.
The first opponents for Aquilonia will be their neighbours to the south, Argos. In the Conan stories Argos was a major naval power so the Argosonians will be inspired by the British, even though I will probably use some very un-British looking troops for the army.
Posted by Steve at 20:13 3 comments: